Happy New Year! We’ve finally closed the door on 2022, a wild and exciting year that also happened to be our second full year in business. We celebrated the 2nd anniversary of our launch in October, a capstone to a year that saw us finally being able to travel again, visit distilleries again, and start to do in-person whiskey festivals for the first time… but also brought its share of Covid-related challenges. Including getting Covid ourselves after two years of dodging it! But, in the tradition of the kinds of stats we used to share when we were on our 8-month road trip, we wanted to put together some stats from the year that’s gone. Take a look!

Number of single cask whiskies we released in 2022: 16, plus our first 2 private casks

Number of blends we expected to release: more than zero (thanks, Covid) 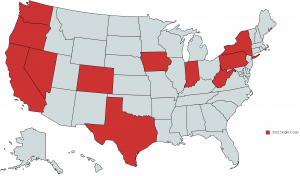 States we released our first single casks from in 2022: Nevada, Pennsylvania, Washington

State we released the most whiskies from in 2022: Oregon (2 single casks + 1 private cask)

States we thought we’d release more whiskey from in 2022 than we did: Texas, Washington, Arizona, California, New Mexico

State we have released the most single casks from since launch: three-way tie between Texas, California, and Oregon, with four single casks each

Distilleries we have released the most single casks from since launch: tie between Boulder (Colorado), Cedar Ridge (Iowa), and Whiskey Del Bac (Arizona), with three single casks each

Distilleries we’re just dying to work with but haven’t yet: Wouldn’t you like to know!

Most obvious states we haven’t worked with yet: Kentucky, Tennessee, Vermont

Fastest-selling single cask: Balcones Texas Single Malt Aged In A Tequila Cask (sold out in an hour and a half)

Best-Reviewed Whiskey: Balcones Texas Single Malt Aged In a Tequila Cask (Breaking Bourbon, 4/5 and one of the Best Finished Whiskies of 2022)

Estate Distilleries Visited (growing 100% of their own grain): 3

Miles Driven: We don’t even want to know

State we’re most surprised we didn’t visit in 2022: Iowa

Shortest Trip: April, 3 days to California for a whiskey festival and a distillery visit

States Where We Did Whiskey Festivals: New York, California (four times – three in the Bay Area and one in L.A.), Texas (Austin), Washington

States Where We Wanted To Do Whiskey Festivals But Couldn’t Pull It Off: Iowa, Illinois, Texas (Houston or Dallas), Arizona (Phoenix)

If you’ve read this far, we’ve got some predictions about what we ourselves will do in 2023 that we want to share. These may be a little spoiler-y, but we do want to give you all a few clues as to what’s to come!

Odds that we release only single casks this year: 0% (rounded down)

Odds that we release another blend of whiskey from multiple distilleries this year: 75%

Odds that we release multiple blends this year: 50%

# of Distilleries We’ll Release Whiskey From For The First Time: at least 4, probably 7+

# of States We’ll Source From For The First Time: hopefully 3-5, but no promises!

It’s going to be a really exciting year for us, and we can’t wait to see what new adventures this year brings. We’re so grateful to everyone who supports us, whether you’ve been following along since our road trip or just discovered us recently. Either way, cheers to a Happy New Year and a great year ahead!

Holiday Whiskey Gift Guide 2022: A Whiskey For Every Palate

Well folks, it’s that time of year once again! The time when you start to worry about what you should be getting for everyone on your lengthy list. Good news! We’re here to help you find the perfect whiskey gift for your favorite whiskey-loving person (or for yourself!). For our 2022 whiskey gift guide, we’ve […]